How to Train a Rescue Dog

Have you known someone whose dog runs away as soon as they are out of the house or off the leash?  I have a friend whose dog thought it was a game when they tried to catch him, he would run farther away and stay out of reach.

How about a dog that barks ALL the time or one that chases cars?

Not only are things like this annoying, but they can be dangerous for your dog.  Your dog could get hit by a car or incur other injuries.

A well trained dog is a joy to have around, not a chore or nuisance!

How We Trained Our Rescue Dog

We took in a rescue dog almost eight years ago.  Poor little thing was starved and filthy.  After a check up at the veterinarian’s office including vaccinations and a bath, we brought him home.  The veterinarian guessed him to be around three or four years old.

We didn’t know his name or if he had ever had one.  We decided to call him Ollie.  To teach him his name we got small pieces of cheese and sat on the floor.  My husband on one end and me on the other.  We took turns calling Ollie to us and if he responded to the name, he got a cheese reward.  He learned his name pretty quickly, because that cheese tasted good and it was nice to have a home!

Ollie slept in a crate at night, for the first couple of years.  He took to the idea pretty quickly.  All we had to say was “night-night” and he went in the crate and waited for his bedtime treat.  We still have the crate, but the door stays open and he goes in and out as he pleases.  Sometimes he goes in the crate for a nap or to relax in his den.

Now “night-night” means go potty, get a treat and the humans are going to bed.

I have found that kindness and positive reinforcement works much better than yelling or trying to force a dog to do something.

Teach a Dog to Sit

Sit:  Hold a treat in front of your dog if they automatically sit, say “sit” in an assertive voice and reward them.  If they don’t sit, gently push down on their back near the tail.  This will need to be repeated several times.

Teach a Dog to Lie or Lay

Lay or lie:  Hold a treat in front of your dog, get their attention on the treat, then slowly lower your hand holding the treat to the floor.  Usually the dog will follow and lie down.  Say “lie or lay” in an assertive voice and reward them. If they don’t lie down, gently push the shoulder area.  Again this will need to be repeated several times.

Teach a Dog to Stay

Stay:  Have a treat in your hand.  Have the dog sit, then say “stay” in an assertive voice and back away from the dog a few steps.  You can use the “stop” hand gesture also.  Choose a release word, we use“ok”.  Then release the dog and give them the treat.  Keep practicing, getting farther from the dog each time.

Other Dog Training and Tricks

Ollie will walk on a leash, but we didn’t teach heel very well.  He tries to pull ahead at first and then lag behind when he gets tired due to being overweight now.

After learning the basics we taught Ollie some tricks like shake (with his paw) and speak for treats.  Ollie kept sneezing while learning speak, so we taught him both.  Ollie will sneeze on command for a treat.  You can teach an older dog new tricks!

I could not teach Ollie rollover, when I tried to help him rollover he would yelp as if in pain.  So needless to say we didn’t continue that training.

Since Ollie had been living outside, we didn’t really have to potty train him.  We taught him to associate “go potty” with the natural action.

Unfortunately Ollie doesn’t like toys, in fact he was scared of squeaky toys.  He does however enjoy cookies, treats and belly rubs.

I admit I always considered myself more of a cat person or a ferret person.  We have had three stinky little destructive ferrets who I loved dearly.

That being said, even though my husband found Ollie and brought him home, he chose me as his human.  Ollie is my dog, probably because I am with him the most.  He comes to me first and listens better to me.  If my husband tells him to “go potty” or “night-night” he looks at me for confirmation.  Ollie is my dog and I am his human.

I talk to Ollie like he is a person and sometimes I swear he understands most of what I am saying.  Ollie actually knows and understands several words.

I won’t say owning a dog is easy, it is a lot of work, a lot like having a furry toddler around.  I will say having a trained dog makes it easier and more enjoyable! 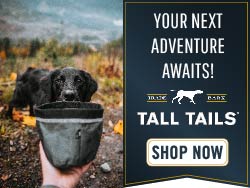 Stop your dog from barking or digging…